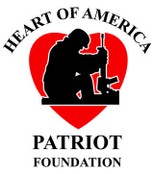 Our Board of Directors

Captain Gorthy is a Vietnam veteran who served 26 years on active duty in the U.S. Navy. He flew numerous attack and fighter aircraft, including A-4s, A-7s, and F/A-18s, and commanded three operational squadrons. He retired from active duty as the Commanding Officer, Naval Air Station, Lemoore, CA. He served in the Federal Aviation Administration in the Office of Safety following his retirement from active duty. Al holds a MS in Human Resources and a BS in Biology and serves as the Foundation's President.

General Gardner flew fighters (F-4s and F-16s) for most of his 27-year military career. He also commanded a B-1 wing, and served as Adjutant General and Director Emergency Management & Homeland Security for Kansas, leading the Kansas response to 9-11 and multiple major disasters. For 13 years after that, Greg served in Infrastructure Protection regional leadership positions in the U.S. Dept. of Homeland Security.  Greg holds a MS in Human Resources and a BA in Business.

Ken enlisted in the Marine Corps in 1966 at the age of 17. He spent the next 26 months on multiple tours in Vietnam. Following his return home, he obtained his college degree and spent the next 47 years in the commercial and industrial HVAC industry. Ken has been on the HOAPF Board of Directors since its inception in 2012.

Dave was the Senior Associate Dean and Chair of the Department of Accountancy at the Henry W. Bloch School of Management, UMKC, until his retirement in September, 2019. Dave serves as the Foundation's Secretary/Treasurer and manages the website.